Through some aberration in the fabric of the universe, my husband has begun receiving a year’s subscription to GQ. As my spouse’s normal attire is a pair of old jeans and a gray Champion hoodie, and his cold-weather-to-warm-weather transition is to switch from long sleeves to short sleeves, this gift in our mailbox is akin to Elton John receiving a subscription to Juggs. (For the record, I’m no fashion plate either.)

But since I cannot resist a peek into what poses as a male-oriented periodical when I’m tossed into the same room with one (my favorite is Maxim), I started reading it. 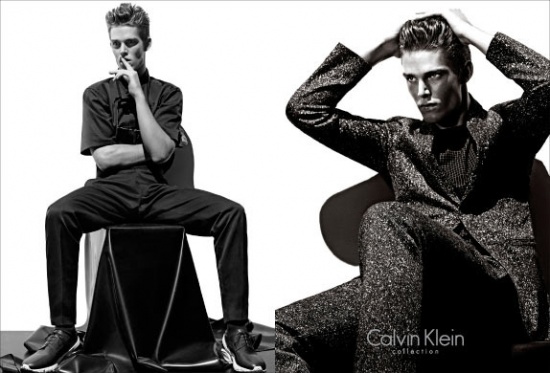 I thought women’s magazines were bad! Holy crow. I couldn’t get past the advertising. These two guys in the Calvin Klein spread (above) look like a cross between Frankenstein’s monster and the guy on the cover of Atlas Shrugged. The guy on the right’s intent stare could melt glass, and there is so much product in vertical sculpture of his hair that he better not get too close to an open flame, lest he reenact Michael Jackson’s Pepsi ad. The dude on the left looks like he’s having a very intense discussion with himself about whether he left the iron on.

There’s an entire novel going on in the Gucci spread. Sorry, I couldn’t find the full image in all of its ambiguous glory, so you’ll have to take my word for it. A clean-shaven young man with knife-edged cheekbones has his eyes downcast and leading off the page. Perhaps he is holding back tears. Apparently, these tears are because the dramatically-posed stick insect of a female model standing in the center of the spread does not return his intense feelings of love. She presses one hand to her temple as if she has a horrible headache. Perhaps this was caused by the overzealous aesthetician who removed all the hair from her head. A finger covers an eyebrow. Maybe the waxer got to that one before she decided the Sinead O’Connor-meets-Mona-Lisa-look was probably not the best career move for her head shape. At the right is a man in a tightly fitted, shiny suit, sitting cross-legged in a way that tightly fitted, shiny suits do not normally permit. Another woman, who has hair on her head but apparently is wearing a horse’s mane as a top, leans over him and whispers in his ear. What that is we may never know, but this guy isn’t having any of it. He continues to stare at the shiny fabric covering his left calf as if it contains the secrets of the universe and the location of Jimmy Hoffa’s remains.

But what really made my day was this Dolce & Gabbana spread (top). As I’ve said, I’m tragically out of the loop when it comes to fashion, but I didn’t see anything in this ad that resembled fashion. It’s a black-and-white spread featuring seven guys involved in a very intense game of tug-of-war. We do not see against whom they are tugging. Maybe the guys in the Calvin Klein ad. They look like inmates from a Turkish prison, and all have varying degrees of facial hair and lengths of fabric torn off their white pants. The one in the front looks vaguely like Barack Obama scolding John Boehner. They dig their feet-all wearing oxfords, some without laces-into the sand. At the bottom left of the spread, looking off the page, is a small black dog that looks seriously underfed. I do not understand the significance of the dog, and this disturbs me. Meanwhile, I draft in my head a novelization of the ad, a cross between The Great Gatsby, The Dirty Dozen, and Midnight Express.

This intense focus on creating a context for the products confuses me just about as much as the context itself.  I know what the ads in women’s magazines are trying to express-they’re attempting to make us feel uncomfortable and insecure about our bodies and beauty so that we will continue buying their products and the magazines. I don’t know what the hell the GQ ads are trying to do. Maybe you men out there can help me. Do you buy these magazines? What do you think about the advertising? And what is the point of the dog?