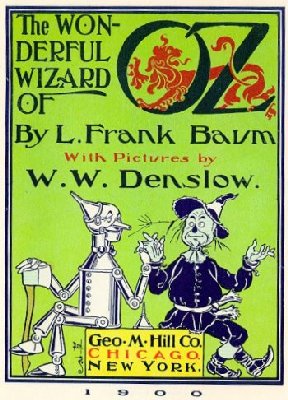 The Wizard of Oz is one of my favorite movies. Even though I have the DVD, and can curl up with it any time I desire, there’s something magical about catching it on television.

It aired in back to back showings last weekend, and as I watched, I was reminded of how powerful this film is as an American cultural icon, as a shared American experience. Who wasn’t frightened of the flying monkeys as a child? Who doesn’t smile when they hear the words, “And Toto, too!”?

At some of my writing workshops, instructors encouraged us to collect “seeds” as others read their work. These are particular bits of writing that catch your imagination and inspire new ideas. As a work of art, The Wizard of Oz (based on the novel The Wonderful Wizard of Oz) is fertile as a fat lady rabbit. Just look at this mere slice of creativity its seeds have inspired (including a great Marj Hahne poem at the end of this post):

2. The Wiz
Diana Ross is Dorothy. Lena Horne is Glinda the Good. Michael Jackson is the Scarecrow. And the great Richard Pryor plays the Wiz. This brilliant 1978 Motown production, directed by Sidney Lumet and nominated for four Oscars, was billed as an “An African American adaption of The Wizard of Oz that tries to capture the essence of the inner-city experience.” It’s technically a second-generation seed, since The Wiz was based on the book of the same name, which was inspired by Dorothy Gale and her friends.

3. Dunkin’ Munchkins
Well, it’s not exactly art, but these bite-sized “donut holes,” introduced in 1972 by Dunkin’ Donuts and sold in boxes of 25 no doubt were named for the small denizens of Oz’s Munchkin Land.

4. Wicked
A mashup of wizardly and witchly wonders, this 2003 Broadway musical (based on a novel by Gregory Maguire) is the story of the witches of Oz. They meet as schoolgirls, long before a tornado drops Dorothy’s house on one of their sisters, and despite their differences, become friends.

5. Toto
What is it about the 70s? Because he’d just seen The Wizard of Oz, Drummer Jeff Porcaro (who died in 1992) got in the habit of writing “toto” on demo tapes he made with his yet-to-be-named band, consisting of keyboardists David Paich and Steve Porcaro, and guitarist Steve Lukather. This was only designed to distinguish these tapes from their studio work. However, the name stuck, and in 1976 a legend was born, even if most people only remember their single, “Hold the Line.”

6. Ruby’s Slippers
This 2009 novel by Leanna Ellis is a modern, Christian twist on The Wizard of Oz. A tornado busting through Dottie Meyer’s Kansas farm (and putting her in a three-month coma) is only the start of her voyage to find her family and, some readers say, God.

7. The Wizard of Id
Created in 1964 by Brant Parker and Johnny Hart (coincidentally, both died in April of 2007) this syndicated comic strip about the medieval kingdom of Id still appears in almost 1000 newspapers around the world. Parker’s son, Jeff, and Jeff’s wife, Nicola, are currently creating the strip.

8. And one of my favorite seed-blossoms, this poem by Marj Hahne.

A sucker for smart guys, Dorothy Gale,
after graduating from Radcliffe with a doctorate
in anthropology, stayed in Cambridge for its dating
scene but soon grew bored of scholarly discourse
falling short as foreplay. She wanted a roll in the hay,
so she returned to the home of her dreamy Kansas
girlhood, where Scarecrow watched over the long,
fertile fields of corn. He’d come far since Oz,
taking night classes in humanities at the local
community college. Tuesday evenings and weekends,
Dorothy and Scarecrow went head to head in Scrabble-
he, a keen strategist, making multiple words in a single play
by laying the lettered tiles parallel to ones already on the board;
she, a lover of words, aching to make mauve, pecan, canopy.
No matter who won the game, they both scored big
in the end, sweaty and breathless and coming
apart in the corner stall of the barn. But Dorothy
was a junkie for adventure, always off on some emerald
jaunt in her mind, the everyday sameness of the farm
not shiny enough, and Scarecrow knew this.
So when Tin Man began showing up at the place-
to fix a squeaky door or a leaky pump or a clogged
drain-Scarecrow hung his head in the books
and in his fieldwork, afraid of a match
of wit versus sentiment with his old friend
from the road. Tin Man brought Dorothy roses
and chocolates; he wrote poems for his love dot,
his oil of dee. But his gestures were too mechanical;
he cried too damn much. So, though she knew
she would pine for his woodwork, everything
in the house started functioning again. Truth is,
Dorothy wanted a mate with more mettle, more leap
in his step. So, that winter, when Lion came by the farm
collecting clothes and toys for the annual holiday drive,
Dorothy invited him in for supper, sunflower biscuits
and a carrot-mushroom-corn loaf hot in the oven.
They toasted to witches, wicked and good, laughed
about the time she slapped him hard on the nose
for chasing Toto. While Dorothy talked about her
dissertation on the migration habits of Homo munchkinensis,
Lion, having barely touched his plate, excused himself,
ambled to the sofa, stretched regally across
and over the length of it, and fell asleep.
A vegetarian since her undergrad days-
a radical turn from Auntie Em’s home cooking-
Dorothy knew she couldn’t be too picky
about certain lifestyle choices in the dating pool.
But, as a chronic insomniac (since the twister of ’39),
she had to steer clear of snorers, and Lion’s snores
were far less sexy than his roars.
Discouraged, disheartened, dumbfounded,
Dorothy Gale did what any self-respecting woman would do:
she went out and found a new pair of shoes.

8 thoughts on “8 Works Inspired By The Wizard of Oz”