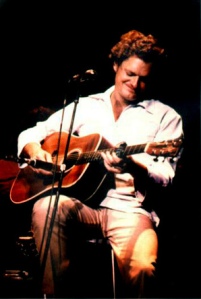 If you’ve ever read any of author Chris James’ blog posts, you know that he normally ends with a video of one of his favorite songs. Normally this is something from Genesis’ discography. I think he has a side deal with Peter Gabriel, but I could be wrong. This week, he ended with a songwriter close to my heart: Harry Chapin singing “Cat’s in the Cradle.”

I’ve adored Harry Chapin since high school. He was a New York guy; he and his brothers, Tom and Steve, were born upstate near Watertown and some of his family still lives there. I’ll get to them later. Harry eventually landed on Long Island and that’s where he died, playing chicken with a truck on the Long Island Expressway. My father and stepmother were huge fans and still are, so I got the privilege of hearing him perform live three times: at a college in Newburgh (he loved playing colleges), at the Civic Center in Poughkeepsie, and at the Hudson Valley Winery in Highland.

At the winery, three days before my seventeenth birthday, is where I finally got to meet him.

After the performance—spectacular, by the way, and he played the extra-extended version of “30,000 Pounds of Bananas” but only after the audience begged—we stood in line to meet him and get autographs. My parents had been involved in fundraising for Pete Seeger’s Sloop Clearwater Project, among other causes, so I’d been to a fair number of small-venue concerts by then. Enough to know if the guys in the band didn’t really give a crap about meeting fans, that it was just an obligation because you paid for your ticket and it was good PR to act like you cared. Some didn’t even hang around long enough to do that. Harry Chapin didn’t have to stick around and meet fans. He’d played in London. He’d played Carnegie Hall. He’d been on Johnny Carson. But he hung around. He cared. He shook hands. He listened to stories. This was what, he’d said, inspired the songs he wrote. He traveled around and listened to peoples’ stories.

Meanwhile, as I waited with my father, I sneaked glances at Harry, cowed and amazed at the easy way he engaged with people, like he was born to it. Like that one person he was talking to was the most important one on the planet. When it was our turn, my dad shook his hand and thanked him for his music. I think I might have said something, but I was terrified. I think I asked for his autograph. He signed the front of my T-shirt (collarbone level, no straying hands), made an innocent-yet-slightly-naughty joke and smooched me square on the lips, right in front of my father.

Then I bought all of his albums.

Almost exactly a year after that, I met a guy from Upstate New York. His last name was Chapin. Yes, they were related. There are a lot of Chapins running around up there, in that Watertown/Black River area. Some look exactly like Harry, I mean a freakish resemblance, down to the cleft chin and twinkling eyes. The hole in the family still pulsed, a raw wound. The cousin I met listened to my albums so frequently I thought I’d have to replace them, and I was not allowed to speak while Harry sang.

The relationship did not end well and the less said about it, the better. But for a long while afterward, I could not listen to Harry Chapin. I’d let my sweet, lovely memories be subverted by some bad associations. And one day, years later, I found a cassette tape of his greatest hits in a box long forgotten.

My car was old and still had a cassette deck, so I popped it in and cried all the way through. Not for the Chapin cousin. But because I’d denied myself the pleasure of Harry’s songs and stories for so long. And because fate and a tractor-trailer denied us more of them.

Here is one of my favorites. Thank you for reminding me to focus on the good memories, Chris.

13 thoughts on “A Better Place to Be”