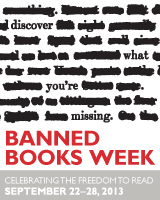 Have you ever read a banned or challenged book? Chances are that if you had a public school education, you’ve already read plenty of them. The Grapes of Wrath? Banned for its religious and labor union references. Brave New World? Banned for references to drug use and sex without benefit of marriage. The Catcher in the Rye? You name it. One of my favorite novels, Lolita, has been on a banned or challenged list pretty much every year since its publication.

First launched in 1982 and held during the last week in September, Banned Book Week celebrates and supports the freedom to read. It seeks to bring together everyone in the book community—schools, libraries, bookstores, publishers, writers, and more—to preserve the freedom to share ideas, even those out of the mainstream.

Part of that celebration has included some great videos on YouTube. For weeks now, people have been uploading videos either about banned books or of someone reading from a banned book. Why not make your own? Or check out some of the other events going on this week, like Twitter parties and virtual hangouts. Here are a few of my favorite videos.

A Catcher in the Rye

(Note: Part of this blog has been stolen, er, borrowed, from one I wrote on the subject for Indies Unlimited.)

5 thoughts on “Have You Read a Banned Book Lately?”