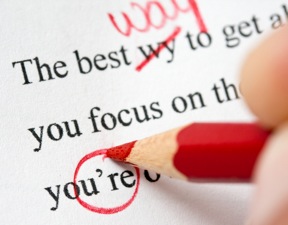 One of the trickier tricks with commas is figuring out how to use them around appositives. An appositive is a noun or a noun phrase in apposition (used to describe) another noun. Um…what? Here’s an example:

Professor Katydid, award-winning entomologist, will be lecturing tonight on the mating habits of Madagascar hissing cockroaches.

“Award-winning entomologist” is a noun phrase that further describes Professor Katydid. Therefore, it’s an appositive. Notice that our appositive is set apart from the rest of the sentence by commas. This tells us whether the appositive is nonrestrictive or restrictive.

How do you identify a nonrestrictive appositive? Glad you asked.

If you can remove the appositive and still have a sentence that makes sense (and you still know who the heck we’re talking about), it’s considered nonessential information and you have a nonrestrictive appositive.

Professor Katydid will be lecturing tonight on the mating habits of Madagascar hissing cockroaches.

Okay, even though we know a little less about the dude, we still clearly know who’s lecturing, so the appositive we removed is nonrestrictive and needed to be set apart with commas.

Here are a few more examples of nonrestrictive appositives you might come across:

Suzy’s husband, Freddy, said he’d rather eat a Madagascar hissing cockroach than attend the lecture with her.

Okay, here’s where sentences like the last two can get a little tricky. If the noun phrase is restrictive (that is, a restrictive appositive), it provides essential information about the noun. If Dr. Katydid had three daughters, and we removed “Penelope” from the above sentence, we would not know which daughter is being referenced.

So if this were a restrictive appositive situation, the sentence would look like this:

Maybe so she could go online and gossip with her two other sisters, both away at college, about how weird Dad’s getting with those cockroaches.

And, assuming that Suzy only has one husband, the commas in the first nonrestrictive appositive would stand.

Sometimes I see comma confusion around things like this:

Both examples are correct. The first is nonrestrictive, and the second is restrictive. If we remove “the folk singer” from the first sentence, we still get it. We know we’re talking about Pete Seeger. Therefore, that appositive is not essential information. If we remove “Pete Seeger” from the second sentence, then we get something that doesn’t make much sense, unless you write newspaper headlines. So, that’s essential information to the sentence.

If we boil it all down:

Here are a few more examples:

Suzy’s sister-in-law Mary shot a guy in Reno just to watch him die. [Restrictive. No commas, assuming Suzy has more than one sister-in-law.]

The guy Mary shot, a suspected child abuser, had been under surveillance for three weeks. [Nonrestrictive. Commas. The appositive adds information about “the guy Mary shot,” but is not essential to the integrity of the sentence.]

Pete Seeger’s song “Abiyoyo” is one of my childhood favorites. [Bonus points here: “Abiyoyo” is not set apart with commas because Pete Seeger has recorded a boatload of songs. And a song name is set in quotations (at least according to the Chicago Style of Manual), yet the name of the album it appears in would be set in italics.]

2 thoughts on “Are You Appositive About That?”