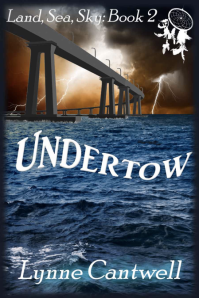 It seems fitting that I post this on Thursday, because Lynne posts a review each week for her “Rursday Reads.” Here’s my review for her just-released Undertow, the second book in her new Land-Sea-Sky series.

The second book in Lynne Cantwell’s Land-Sea-Sky trilogy digs deeper into the characters introduced in the first installment. (And if you’ve missed it, or if it’s been a while since you read the first, she includes a really helpful recap.) The tension between and among Tess, Sue, and Darrell in the aftermath of the events of Book One is palpable. Sue’s jealousy that every man she meets seems to like Tess first is poignant and well drawn. I could really identify with her. Tess has her own insecurities, especially the inability to accept the guidance of her goddess, Morrigan. Darrell tries to balance his Potawatomi medicine-man background and his new warrior persona after an attempt to reconcile with his ex-wife fails. I especially like Darrell’s journey in the series so far, with his trickster god Nanabush by his side giving him…well, sometimes advice that makes sense, and some Darrell can only scratch his head at as he tries to do the right thing.

Among the many reasons I liked this book is that the humans are so wonderfully human and so well portrayed. They aren’t always sure of themselves. They try to do what they think is best; they have doubts. So I felt relieved along with Tess and Sue when a new assignment in Virginia Beach pulls Darrell away from the house the three share, giving them all some much-needed space. But the human interaction is only one layer of this story. With her journalistic and precise writing style, Ms. Cantwell twists together a possible terrorist crisis (and a powerful hurricane barreling their way) with the personal lives of three engaging main characters and the divine entities who assist them. Well done, and I’m looking forward to the conclusion.

One thought on “Undertow by Lynne Cantwell – A Review”