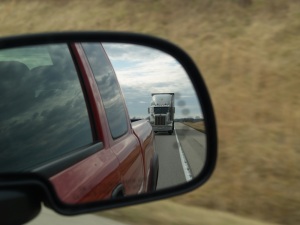 Advice is a funny thing. More often it has to do with the person giving it than the person it’s directed toward. I’ve been advised frequently not to look back. That history is in the past, and we are all supposed to move forward. Sharks have to keep swimming or die. Lot’s poor wife chanced a glimpse over her shoulder, and look what happened to her. Salt city.

I won’t get into too many personals here—that’s a conversation for another time, and maybe for another book—but there are a lot of episodes in my life that I’m not ready to taste twice. However, the occasional peek into the past does two important things for me. Fuel for fiction, for one. Speculation of the road not taken (yes, that rhymes and I don’t care; sometimes that’s the way the words crumble) has given me rich material for stories. “What if?” is a fiction writer’s catnip, and if I’d had a completely uneventful and unobservant fifty-odd years, I wouldn’t have much to write about.

The look behind also lets me gauge how far I’ve come. I had a glimpse of that this week thanks to the lovely and gracious Kim Mutch Emerson, founder of MasterKoda Publishing. On the MasterKoda Facebook group, she used the “Throwback Thursday” meme to ask us where writing fit into our lives ten years ago, and then this week, five years ago.

Ten years ago, I balanced a demanding full-time job with writing novel after novel. Occasionally I’d get up the juice to query agents and go to conferences. I heard “not for us” a lot. I smiled and kept going, because that’s how the machinery of the process operated, much like the wheeze and groan of the factory floor below my office. I did not like to talk about my writing at work. Mainly because I’d convinced myself that if I jabbered on about “novel this” and “agent that,” my coworkers would think I was not serious about my career. One of my colleagues, a pretty brilliant guy, saw something else when he learned that I wrote. “I like how confident you are,” he said. “You don’t need to show off to get validation.”

Blink. Blink, blink. I didn’t think I was all that confident back then. Insecurity kept me quiet; insecurity kept me from a lot of things, but I liked his view of me and how could I disappoint him?

Five years ago, I was in a completely different place. I’d lost the job that I felt was so important I had to shield my passion to preserve it. I’d lost other things, too. But I was also finding a new direction. Building a freelance writing and editing business. Blogging for a women’s website, now defunct yet still cherished in my memory. Finding my footing was a bitch as the rubble shifted, and I fell down a few times, but I kept getting up.

Five years from now, if I’m asked this question again, I hope I can say that the path smoothed out, and while occasionally I might have stubbed a toe or tripped over my shoelaces, I still kept getting up. And took the occasional backward glance, just to see how far I’d come. Then smiled.

Where were you ten years ago?

8 thoughts on “A Glance in The Rear-view Mirror”