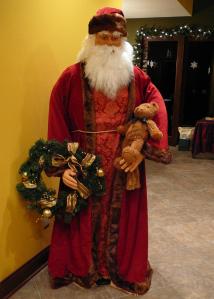 Hi, everyone! I’m so psyched to be shoulder-to-shoulder with these wonderful writers in the 12 Blogs of Christmas event put on by Martin Crosbie. So let’s keep the fun rolling.

Yo, Santa baby. I know it’s close to go-time and your mental bandwidth must be stretched as thin as the photoshopped spandex in Kim Kardashian’s butt selfie, so I’ll try to keep this brief.

First, I feel your pain about Rudolph’s resignation. I’m sure he’ll do the air traffic controllers proud, but promoting Dancer could be a no-go. Seems the headlamp we wanted to attach to his antlers violates some PETA regulation. We’re looking into that. And you didn’t hear this from me, but there’s a rumor that a few elves are planning a sickout. Guess they’re still a little steamed about losing their collective bargaining rights.

I’m also sorry to report that we didn’t get better news out of our last focus group. Your poll numbers are dropping fast with the Millennials. We have to act now, or you’ll lose credibility with this next generation completely.

My team crunched the numbers, and we think we have a workable plan of action, although it won’t be without its sacrifices. After all, in this economy, we all need to tighten our belts and think outside the box (not to mention recycle the old clichés because we don’t have enough scratch in the budget for creative.) Given that we’re increasingly between a rock and a hard place, I need to give it to you straight up, big guy. We need to boost our image on the cheap, so I’m laying out our top-priority recommendations:

So, yeah, these are just some things to put in the hopper. Maybe after the big day, you, Mrs. Claus, and I can sit down and start drafting media announcements about your trip to Boca to look at semi-retirement communities. She already showed me the website; that unit near the ninth hole looks pretty sweet.

I’m proud to be involved in the 12 Blogs of Christmas with some terrific authors including my friend, bestselling author Martin Crosbie, who put this whole party together. Living on the west coast of Canada, Martin has written five books including Amazon bestseller My Temporary Life. His popular Christmas novel Believing Again: A Tale Of Two Christmases is available in e-book format in the US and UK as a Kindle Countdown Deal from December 24-27 for only 99 cents. Excellent stories and I’ve read them both.

Also, if you’d like to pick up a copy of Drawing Breath, I’m having a little promo of my own. It’s 99 cents on Amazon through New Year’s Day. And if you’d like a free download of the audio book, narrated by Randi Larsen, hit me up and I’ll email you the code and the instructions from Audible.