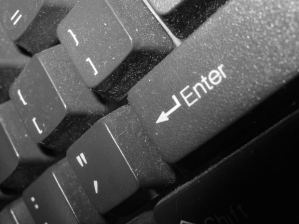 Poor, sad, neglected blog. Today I want to share something I wrote for “2 Minutes. Go!” on JD Mader’s Unemployed Imagination website. I love our Friday flash fiction fiestas. Maybe next week, you’ll come over and play with us. Here’s what we wrote this week—great, short entertainment for nada! Nothing. Zip. Just your eyeballs. Bwa ha ha.

After typing “I didn’t know how else to tell you,” no more words would come, no matter how hard Delilah pressed that mental pencil against the cells in her brain that were supposed to perform those functions.

Maybe there was something wrong with her. Maybe in her sleep, the karma skulking around her corners had unhooked her battery, cut her brake lines, slashed her tires. Because she cranked out assignments like this every damned day. Okay, it was a strange freelance gig, but she thrived on the strange, the out-of-kilter, the anything-but-normal. In this world of have what you want when you want it, why not throw down a few bucks on PayPal and hire someone to write that break-up letter, to give that bad news, to tell that idiot who won’t leave you alone to take a hike? They were even fun, mostly. How many people were paid, and paid decently, to exorcise the vitriol out of their heads? Her husband didn’t make much; it was nice to have a few bucks of her own; and because she’d never see her clients, or the results of her work—all was carefully monitored to shield the writers’ identities—it was relatively easy. But the screen where she was supposed to load her latest assignment remained blank.

Hoping for another blast of inspiration, she reread her instructions: “Want to ask my wife for a divorce, she’s always working, I fell in love with someone else, really crappy with words.” Yeah, that didn’t help. In fact, it just made Delilah angry. The light stuff, the snarky stuff, the hey-roomie-take-a-shower-once-in-awhile stuff, that was fun. It was an act of kindness, if you looked at it a certain way. But when it got heavy like this? Now it just felt wrong. Damn it. She’d already claimed the assignment, so she had to file or lose her five-star ranking. But this was the last one. She’d be happy to write about bad breath and chewing with your mouth open and PDA, but no more missives about shit getting this real.

So she sucked in a breath and began typing a version of Breakup Template #3. When it shaped itself into something she could almost live with, she pressed the submit button and went straight for the wine.

Two glasses later, her husband working late, she followed up to make sure the deposit had gone into her account. Then checked her email.

The first message began, “Dear Delilah, I didn’t know how else to tell you…”