Come on-a my house, my house, I’m-a gonna give you candy… Well, not so much. But I have something better. I’ve got JD Mader chained to a radiator in my basement and he’s letting me host the luau today! So…

Hey, writer-type folks. AND PEOPLE WHO JUST WANT TO PLAY BUT DON’T IDENTIFY AS ‘WRITERS’ – all are welcome here! Every Friday, we do a fun free-write. For fun. And Freedom! And for JD! (Jeez, I hope nobody can hear him screaming down there.)

Write whatever you want in the ‘comments’ section on this blog post. Play as many times as you like. #breaktheblog! You have two minutes (give or take a few seconds … no pressure!). Have fun. The more people who play, the more fun it is. So, tell a friend. Then send ’em here to read your ‘two’ and encourage them to play.

I’ll start us off…

The doctor slips the SIMM card into your trembling palm. Amazing, how small they can make them these days. Not like the prototype the researchers had nicknamed “Das Reboot,” clunky with chips that needed re-seating every year, the video chattering and breaking down. You turn it around in the light.

“Nice, huh?” He crosses his arms over his chest, like he built the damned thing, like he ground the rock into silicon dust and poured the molds. It is impressive, though, but—

“And these are…” You suck in a breath. “Authentic memories?”

“Well. Given the state of the technology, as authentic as we can code. But I’m confident you’ll find that once it’s installed and the software is uploaded, the random selection of stepping stones from your life will equal or even surpass the significant memories the average person can access.”

You level your gaze at him, one question on your mind. His quick glance to his shoes tells the story. There is no guarantee that you will remember Eddie. Not the first time he smiled at you, the goofy look on his face when he asked you to dance. It’s all been fading away so fast. Already you can’t remember certain things. You know there were children; you can see that from the pictures. People tell stories about him, but it’s like they’re describing a television show; it doesn’t hook into anything that feels real, that feels like at some point, you were actually there.

“Tell me straight, Roger. All these years between us, you owe me that. What are the odds?”

He shook his head. “It’s not good, Lucy. But it’s something. I can get you on the schedule for next week, if the possible outcome is enough to hang your hat on.”

Your eyes ping wider. He wore a hat. Or at least you think he did. “Yes.” The smooth, cool device in your palm seems to sing to you, old lullabies, crooning in your ear during that first dance. “Sign me up.” 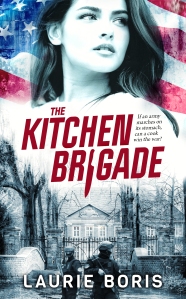