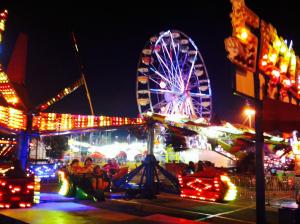 What a week! So I blew off a little steam at the hula-hoop rockabilly break-the-blog revival at JD Mader’s Unemployed Imagination. Maybe you’ll join us next Friday for a little two-minute (give or take) flash fiction. Here’s one of my pieces from this week. I hope you’ll also roll on over and check out what the other writers threw down. So much fancy word-dancing in one place.

The kid with the Harry Potter glasses had an arm on him—the only worrisome prospect Joey had seen all night—but three tries, no dice. “This game is rigged.”

Joey smirked. “Tell it to someone who makes more than five bucks an hour. Next!” But the troublemaker didn’t move. Just pressed his lips together and gave him the stink-eye. “What? You casting a spell on me?”

“Beat it, kid. Go get sick on corn dogs or something. You had your chance, let someone else take a turn.” He grinned at the tiny red-haired girl behind him. “Step right up, little lady, three chances to knock a bottle down, three chances to win!”

She pursed her lips at him. “Says who?”

“Says physics, that’s what. The bottles are weighted on the bottom. The balls aren’t heavy enough.”

“Jeez, kid.” Joey pressed his palms into the counter and leaned forward, trying to look menacing. Not easy in the stupid candy-striped vest management made them wear. “Trying to make a living here. You think my various vices and devices come cheap? Now step off and let the lady try.” He hooked an eyebrow. “Unless you’re afraid she’s gonna show you up.”

Still eyeballing Harry Potter, Joey rustled up three balls and smacked them down in front of the girl. She gave the boy a testicle-withering glare, fired back and bam-bam-bam, three bottles toppled over.

Mouth falling open, the kid reached for his back pocket. “I wanna try that again.”

Joey stuck out his palm.

Six tries later, the boy groaned in disgust and skulked away.

When he was out of view, Joey beckoned the little girl forward and slipped a five into her hand. She dropped her gaze to the bill, then back up at him. “You promised seven.”

He slid her a grin and added another couple of bucks to her take. “You learn quick, sweetheart,” he said, tugging on one of her braids. “One day you’re gonna make Mom and I so proud.”

Laurie Boris has been writing fiction for over twenty-five years and is the award-winning author of five novels with another on the way. When not playing with the universe of imaginary people in her head, she’s a freelance copyeditor and enjoys baseball, reading, and avoiding housework. See what’s on sale this month here.

Want to join the mailing list and learn about special deals and upcoming releases? You can do that here.