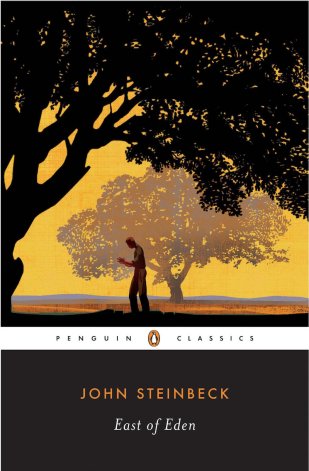 Sometimes it’s hard to wrap my head around the fact that hundreds of books are either challenged or removed outright from schools and libraries each year in the United States. And many more bans or challenges go unreported. That’s one of the reasons Banned Books Week was formed—to address the growing number of challenges and to work to prevent censorship in our communities.

It’s one of the reasons I’m such a diehard supporter of the effort. Each year, to commemorate Banned Books Week, I read a book from either that year’s most-challenged list or choose one from the many, many classics that have had the most challenges lodged against them.

This year I picked East of Eden. I’d read The Grapes of Wrath a few years ago (I don’t know why my English teachers didn’t assign us either of these books back in high school) and I wanted to applaud, it was so wonderful.

East of Eden is similarly marvelous and deals with mature themes—war, suicide, murder, racism, and sex, just to name a few. My main takeaway is that man is a mixture of good and evil and that we choose which impulses we act upon. Steinbeck tells it plainly with beautiful language, haunting in its simplicity, with sentences so powerful I kept highlighting them all the way through. And he tells it not to throttle a particular bias or to preach or to scold or to titillate, but to be truthful about real life. Which I think is what high-school-age readers need. At that age, our brains are thirsty for answers, even to questions we don’t know we have yet. It’s when we learn that the world exists not in black in white but in shades of gray. I can understand why some might want this book not to be taught in schools, but I don’t agree with them. Taught well and with open discussion, books like East of Eden can get high school kids thinking about complex and very human issues. Because we are all complex and very, very human. Learning about people in different walks of life—real, true, and unvarnished—can only increase empathy for and understanding of others.

What a loss it would be for the world if literature like this was not allowed to be read. These books are a record of our culture, good and bad and all the shades of gray in between.